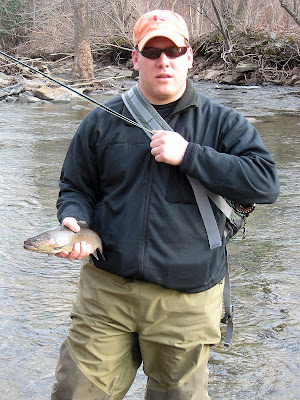 After a long day of teaching, a trip up the mountain was exactly what the doctor ordered and then some. Nothing beats early March dry fly fishing. A decent amount of bugs out to stir the fish up to the surface which included #16 Stones and #18 Blue Wing Olives. I fished an #18 Adams for most of the evening until I could not see the fly due to darkness. That fly alone produced many times to the constantly rising fish. Right before darkness set in, I switched to a White Woolly Bugger to catch a few before heading back to the car. Here are a couple of photos from the trip. I left my SLR in the car because I forgot to bring my smaller lens, but luckily I ran into some guys that I had done some steelhead fishing with about two weeks ago that had a camera on them. So thanks again Brandon. This post had taken forever this evening while watching the Pens comeback against the Blue Jackets. What a third period and getting a much needed point to inch further into the playoffs. Also this weekend, I will have another Tying video to post.