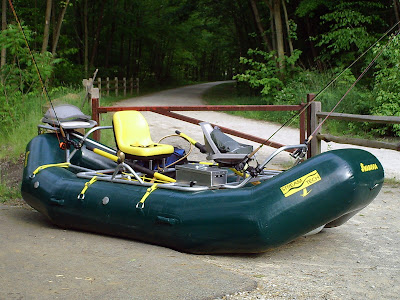 As soon as work let out on Friday, I sprinted up the mountain to fish a freestone stream that had some solid early season dry fly fishing. BWOs and Stoneflies were the ticket that afternoon. When the action slowed on the surface, a Woolly Bugger produced fish in a multitude of colors. Pictured above is my buddy's drift boat that we floated on Saturday. The weather looked promising when we had put in, but that changed when a storm front started to move in after being on the water for about two hours. The water temperature was still around 41F which held the fish in the deepest holes as well as limiting their feeding activity for the day. We hooked a few solid browns and rainbows, but only land one for the day. Had a hefty rainbow on that was in the 5-6 lbs. range, but he spit the hook after a tough fifteen minute battle in some swift water. All fish were caught a sculpin and zonker pattern in hook sizes ranging from #4-8. Hopefully next week on the float will produce some more active fish and weather.