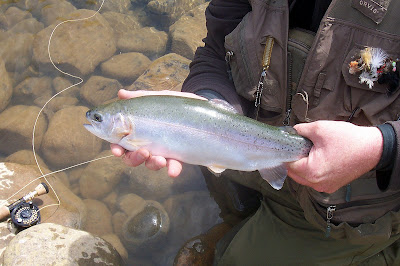 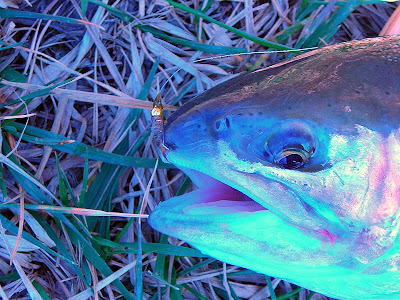 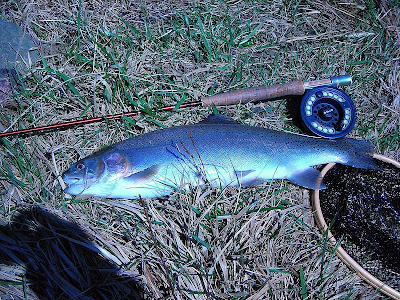 I have been a little behind on my posting but that is due to weather and lack of fishing. Yesterday I was able to get back into the swing of things. I had a chance to fish with a couple of guys I work with, so we decided to head to Maryland. We fished the Savage River and the North Branch of the Potomac River. We started out the day on the North branch the water was still very cold, we were guessing 39 - 42 degrees and crystal clear flowing around 215 cfs...very low for this time of year. We were still able to move and land some fish, the top pic is one of my fellow guides who we will call guide "X"...LOL...with a healthy looking rainbow! The next two pics are of a giant rainbow another one of my co-workers caught. Unfortunately no one was with him when he landed this fish on a flash back hares ear thus the dead fish pictures, this fish was released to fight another day. This guy just started Fly Fishing the end of last season and has got the bug bad, this is the largest trout he has caught on a fly rod to date! Congrats Bob...not to bad for a shooting instructor! We did fish the Savage River later that same day, no pictures yet! I should be receiving them in the next few days and will post with a little bit more info on that part of the excursion! Like always it was a great day to be on the water...but what day isn't!!!