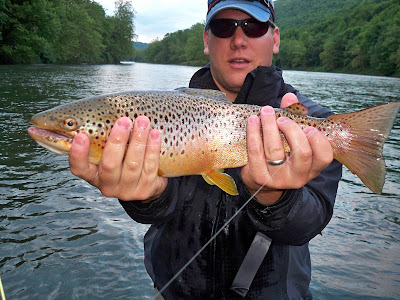 When I got home today from school, I had all intentions of fishing for Smallmouth on Ten Mile since I have been tying a ton of minnow imitations. I messaged my buddy Matt about fishing the river this evening and he was game for it. So about 7pm, we were on the bikes heading down the river trail. The weather was perfect with overcast skies and a warm 70 degree temperature. As soon as we got on the water, we noticed fish rising in a riffle that we normally have seen this type of action. The flow was 1500cfs and the water color was slightly off color. We noticed Caddis, Sulfurs, and some Coffin Flies making their way around the river. After about 45 minutes of searching on actually what insect they were keying in on, I caught the large brown above on a Light Cahill. We estimated that the fish was between 21-23 inches and at least 4 pounds. Two years ago, we had success on the Cahills in this same stretch of water. All of the other fish that we had landed that evening was on a Coffin Fly. The photo below is a brown that Matt had landed on a Coffin Fly that his brother Bill had tied. It also produced another brown and a bow which were in the 16"+ range. As we were walking out of the river around 9:45pm, there was a Crane Fly hatch that was unbelievable.