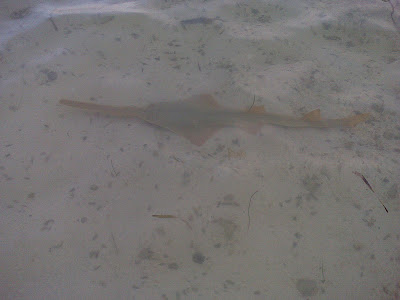 Had to share this picture from my phone when I was on vacation. This Sawfish was swimming around just feet from the shoreline. When Alicia and I went to Key West, FL, we noticed a poster that wanted Sawfish information because there is limited data about this species. So I called the number and this week I finished all of the data that was needed for the research team. This is a photo of a two foot long sawfish which is considered a newborn at this size. 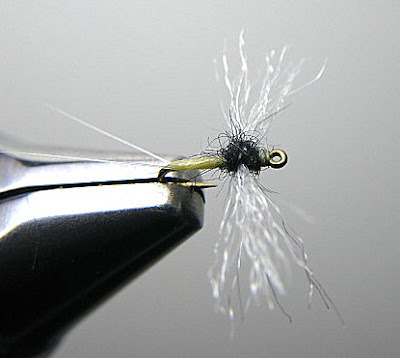 The water has been super low with the lack of rain that we have had over the past few weeks. The river has been the only show in town with consistent flows and cooler temperatures than any other water in the area. Today, I had a trip to our private stream. Flows were slow and the fish were even slower today. We fished beetles, ants, and hoppers all day. They produced a decent amount of strikes, but the fish that were willing to take these foam creations were next to the bank and deep under the rhododendrons. Tomorrow, I have a casting lesson in the morning and a trip in the afternoon. Then I have an Orvis School Monday and Tuesday. So a busy few days coming up on the mountain.
Later in the week, I plan on fishing Spring Creek or the Little J for Tricos. Since the weather has been quite mild over the past month, the hatches should last for a few hours compared to other years. Love or hate the Tricos, they will produce big fish throughout the dog days of summer. I use a size 26 tied very sparse. I will have a report later in the week.
Posted by JMP at 11:05 PM No comments: 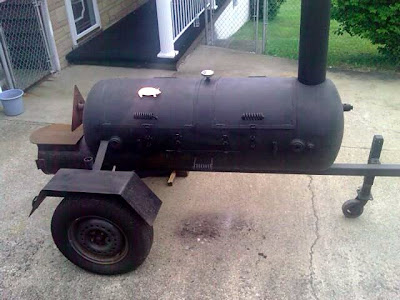 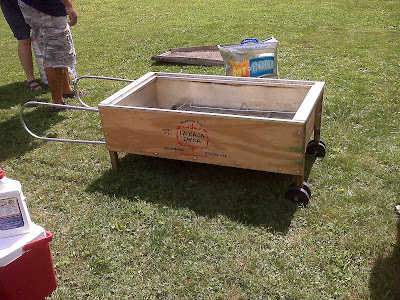 Yesterday, I decided to have a cookout out at my house for a bunch of friends. We used two different methods to cook the meat for the cookout. We used my smoker that my dad had built in August of 2002 to make smoked whole chickens and beef brisket. In the bottom photo, we did four racks of Western Spare Ribs and two boneless pork loins in the La Caja China. This method is completed by putting the meat inside of the box with hot coals on top. I was also excited about using my new cast iron set to cook various side dishes on my grill as well. It was a good time had by all. 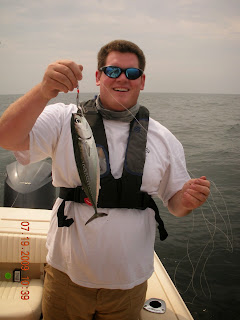 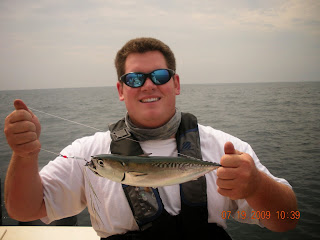 Yesterday, we decided to get the Grady out for a run up the beach to see if we could find some Cobia to break in my T3. However, what we found was a rolling sea 2-4 feet variable, dirty water, and a nice temperature break that was holding some small false albacore over a rock pile in 65ft of water. Trolling medium clark spoon behind a #2 planer board on flatlines worked. The fishing overall was slow but we did produce, getting the skunk out of the boat. I spent most of last night rigging ballyhoo and rigging the Internationals given the opportunity to run to the towers & out to the Point for some Sails & Mahi-Mahi in the up-coming days. Outflow at dusk produced 5 more small "summer" stripers on the ole' 10-weight (Chart/Yellow Puglisi Minners fished on a strip in the rip). Here are some more photos.

Posted by WVUFlyFish at 7:39 AM No comments: 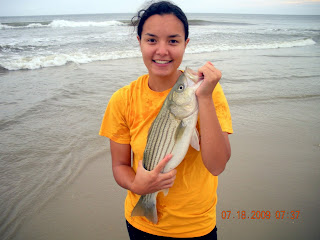 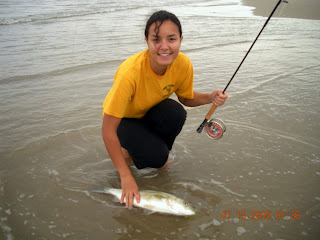 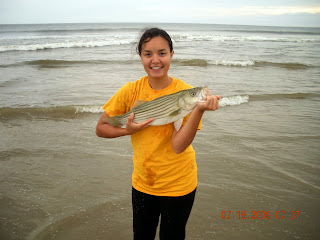 Posted by WVUFlyFish at 8:46 AM No comments: 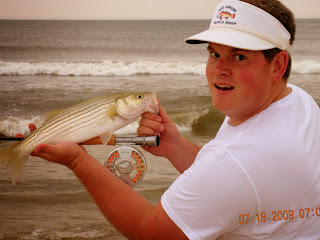 This morning 7.18.09 on 1/0 Puglisi mullet hand tied at home, we caught nice stripers from the beach at outflow in South Nags head. More pics to follow.

Posted by WVUFlyFish at 8:41 AM No comments: 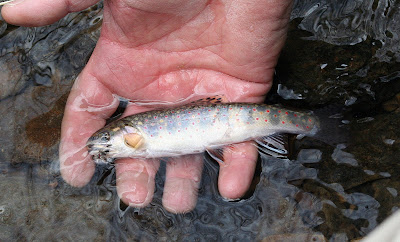 Mid-season dry fly fishing for Brook trout is one of my favorite ways to fish. Had to shake the dust off of the old superfine. So here is a photo of a brookie with a patriot in its mouth. 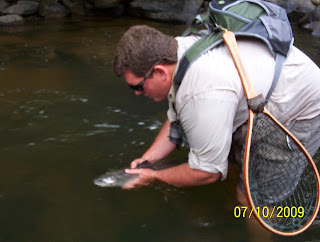 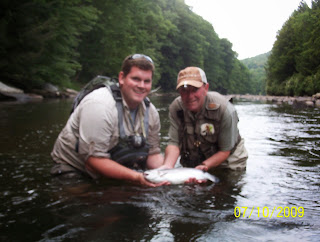 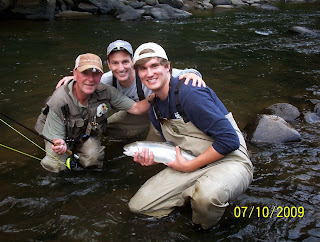 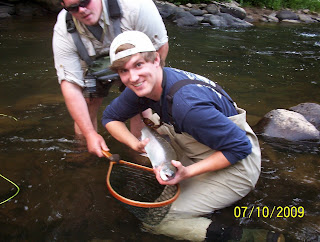 Here are some shots of the beautiful rainbow that our clients recently caught. Upon being taped it was realized that this was in fact a pretty decent fish (24''Length i.e Fork Tail to Tip of face & girth 8.5"). This pig took a size #6 hopper fished upstream against the current on the swing & just crushed it clear out of the water. Following the fish was released back to the wild to naturalize and spawn more monster trout!
Today I am off to OBX to chase some offshore fly fishing around the wrecks for AJ's & weedlines for Mahi-Mahi. Pictures soon to come!
Posted by WVUFlyFish at 8:04 AM No comments: 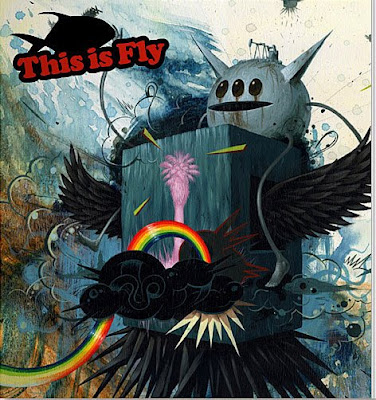 Issue 18 of , This is Fly, has come out today. Be sure to check out the grayling articles as well as some of the best flats photos I have seen.

Okay Folks:
So for the past month, I have really been slacking on the reports. The week I spent in Islamorada can basically be summed up by two words nurse sharks. We caught probably twenty nurseys between 50-100lbs. Everytime we would drift for tarpon, the homer simpson of the shark family would strike and destroy ole mr. mullet. We jumped 30 tarpon over a week long period only to fight one for about ten minutes before it wore through the shock leader (80#) and that was about as close to boating a 'poon as it could have been. I noticed there was not as many fish in the ocean in comparison to when I was down in May, but the fish had size and I do believe the smallest fish we saw was about 80lbs with the largest being close to 150lb. On a better note, the jack fishing with chicken feathers was hot, my brother and myself caught nearly 15 jack crevalles on 2/0 enrico puglisi mullets (chart/white). JMP & myself took a jungle excursion with Capt. Larry Sydnor (who by the way just guided grand champion to the ESPN inshore championship in ISLAMORADA a week ago Congrats!). JMP was on the bow first & snaggled about an 80lber at the bow & had nothing to stick the fish with since the leader was practically in the rod. Needless to say, there was frowns and a tarpon mad because it didn't finish feeding. Nonetheless, the trip into the Everglades was worth the thousand insect bites and 4 blood transfusions to replace major blood loss. Upon return to Maryland, I was back to guiding at Wisp, where the water has been thin and hot. Fished a couple of days this past weekend with another fellow guide and some clients and plucked a fat ole football bow stockie (24") out of Hoyes Run. Note: Pics soon to come once the client sends them to me, my Nikon took a dippy recently. Anyhow, I've been hitting the Renzetti hard, tying up baitfish patterns to prepare for war with some reef donkeys (i.e. Giant Amberjack) here in a week. The preparation has had me ripping through spools of 3/0 danville and my best Gamakatsu hooks. I recently purchased a brand new Nautilus CCF 12T which I am excited to test its sealed drag against some nasty fish. Other than that basically the trout fishing has been kinda slow which is expected this time, I can't wait for Fall to come. Until next time, get out get some fishy hands!
Posted by WVUFlyFish at 12:02 PM No comments: 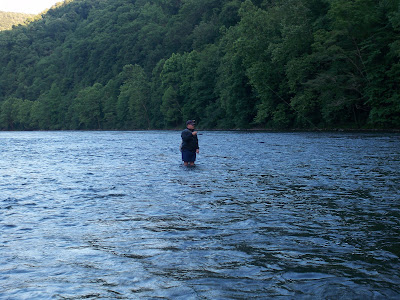 The river has been flowing very low this week (792cfs), so Matt and I decided to bike the trails to find some fish. On Tuesday evening, we both missed a fish. The one came up and hit his white zonker fly as the other missed my green caddis pupa that I was swinging in a riffle. On Wednesday evening, Matt landed one small rainbow and a 16" brown on a #14 Copper John. I had a few hit but that was all. Mike and John went as well on Wednesday evening. Mike landed a Smallmouth on a Streamer and John had a huge brown on in the same riffle that I missed on Tuesday. I have grad class this evening, so the next time I willl hit the river will be Friday evening or Sunday after teaching the Orvis Fly Fishing School.
Posted by JMP at 12:07 PM No comments: About a week and a half ago, I had taken two guys fishing to Beaver Creek for an afternoon of fishing. Not a bad day of fishing with streamers for large trout. The Tiger Trout above was landed by Jordan on a White Rabbit Zonker Fly that I have been tying for the river that this creek eventually flows into. What a good looking fish....
Posted by JMP at 11:59 AM No comments: 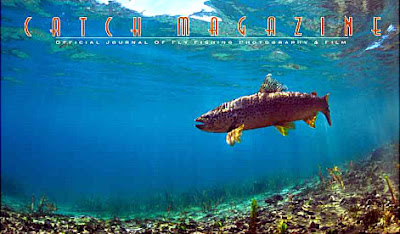 Latest Issue of Catch Magazine is out. Check it out. LINK. 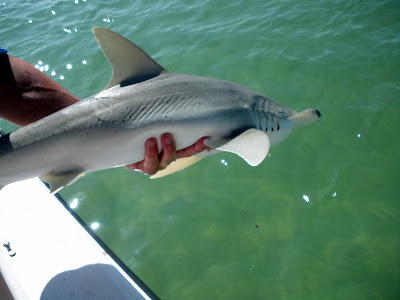 Small Hammerhead that was caught on the ocean side of the bridge. 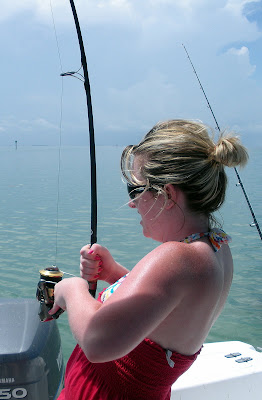 Alicia fighting one of her sharks. 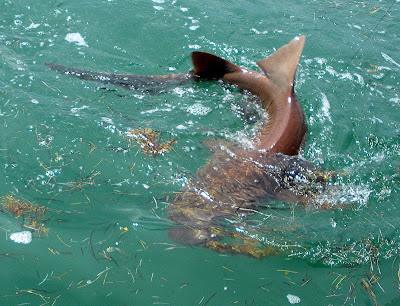 Alicia's Nurse Shark. She caught two that afternoon that were both around 100lbs each. 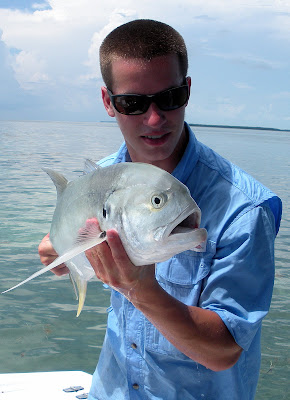 Ian caught nine Jacks that day with his fly rod.