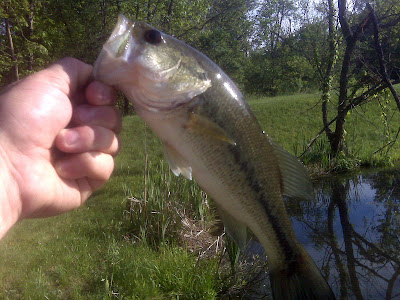 Spent the evening at my friends house to fish his pond over the hill for some Bass and Bluegill. I got there around 5pm, put on a Blue Damsel fly to entice some fish. I caught a few a fish on the fly, but I need to improve my wing material. I may use a deer wing to make it float more consistently. The Bluegill were on their beds working anything that came their way that had foam and rubber legs. Compared to last time I fished there, caught more Bass than Bream this time around. The foam spider pattern was awesome once again and produced on just about every cast. The most interesting part of the night was the 30 10-20# Carp on the surface in the shallows. I threw a few nymphs and eggs at them and had no customers. I will have to consult Larry on how to attack these guys. As soon as I cast at them they would scatter. I had a few singles to cast to, but they would not even turn there head at my fly. I thought more about it on my short ride home to try a soft hackle too. After I had caught enough, I went back up to visit with Jim and his wife for a bit. All in all a good night.
Currently, the streams are slowly coming back down and the river is still very high to get to some of my favorite places to fish. The Yough is at 3,800 CFS and the norm is around 1700 CFS. Coming up this week should be the Green Drakes on the river. So time to head down if the water and rain holds off. Lots of March Browns around Ohiopyle too.