What Keeps Me Coming Back... 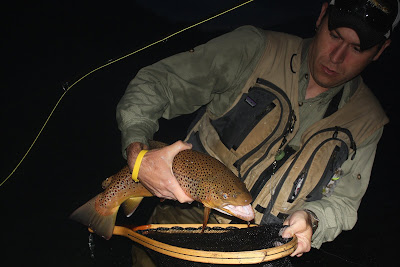 This brown had some girth. 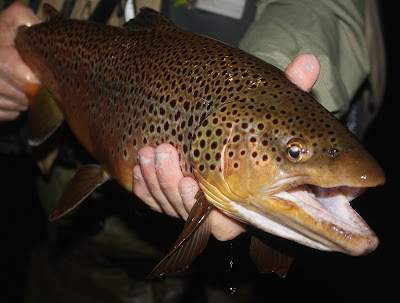 We nicknamed this one "Hog boy Jr." 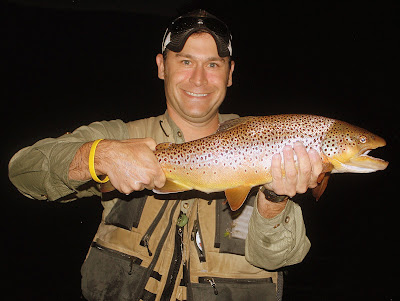 I was waiting on my brother to call me back to see if he wanted to fish last night, but he said he was too busy with work. Luckily, Matt called to let me know that Andy, Bill, and himself were fishing my favorite spot.
Once I got down there, there was a small amount of caddis, sulphurs, light cahills, and some coffin flies. The reason we wanted to make this trip is fact that this was most likely the end of the drakes for the year on this stream. Andy caught three little bows closer to the bank, but had a big boy rising before we got hit with a small shower. Billy had the same issue. One larger fish was feeding pretty good, then the rain put him down. After the rain ended, we just listened for rises on this glassy pool. Matt and I both heard a rise behind us and then worked towards the fish we heard. I was closer to the rise, but within a few cast Matt hooked into the fish pictured above. He smashed a coffin fly. We thought it was a decent size, but wasn't really sure. The Brown had taken him on a few decent runs until we got him into the net. In the low light conditions, I was rather nervous trying to net him because I did not want to hit the leader and dislodge the fly. This fish capped off an weird night of fishing. Sporadic rises, the big boys were out to play as well. The flow was 890 cfs too.  I missed one last night on a coffin fly, but I was actually moving and too much slack in my line to set the hook.

Ten people in the Orvis School this weekend, so I will most likely chase these guys again this weekend. Until then, I will be hunting the next "Hog Boy." 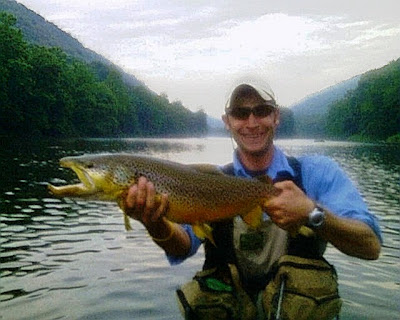 Here is the original "Hog Boy". And these fish are the reasons that keeps me coming back time after time.