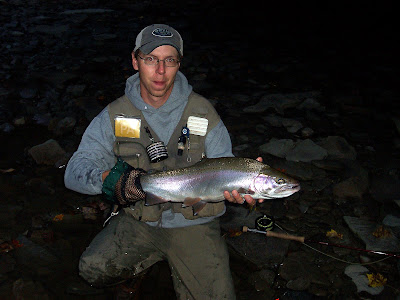 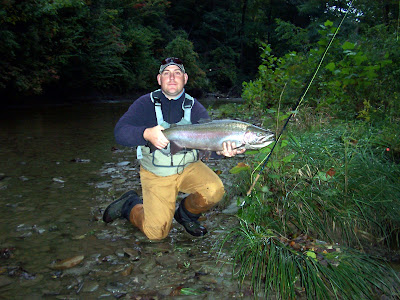 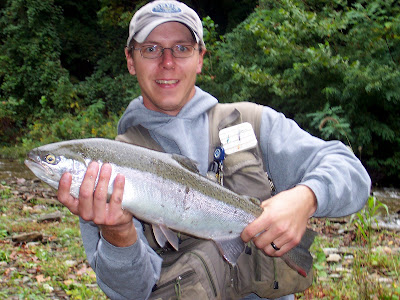 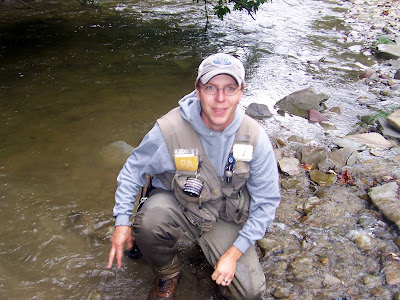 On the last day of September we felt it was time for us to make our first run to the Erie tribs this year. Erie had received some heavy rain a few days prior and we figured with the perfect conditions the Steel should move. We left Uniontown around 3am and were sitting at McDonald's in Erie at 6:20am. We were the first on the stream and about 15 minutes into the trip Larry was hooked up with some chrome. We thought this trip could be epic, but it didn't turn out quite that way. The water was great but there was not a great number of fish in the streams just yet. As the morning went on the actions stayed pretty consistent and I got lucky and hooked up with a giant buck. We guessed this fish close to if not over 12 pounds, it gave me and the 9 wt everything we could handle. We continued to catch a few fish throughout the morning. As afternoon approached we decide to eat some lunch and I had to buy some fresh concord grapes (the best part of early steelhead season) and then finish out the rest of the day on the water. The fishing in the middle of the day was tough, by this point the fish had been fished over and were very skittish. As evening approached the conditions improved, the last couple hours of light seemed to be the best. Larry really laid into them in those last few hours with lots of hook ups and a few fish landed. We used multiple patterns throughout the day and seemed like White Woolly Buggers and various estaz eggs worked the best. Please take note of the last pic, it was snapped after Larry quick released a giant fish with no picture. This happened a few more times throughout the day, I would reach for the camera and Larry would lose the fish... I guess that's what happens when you try to bring hate to every Steelhead you hook in the face with a fly...
Fish on....