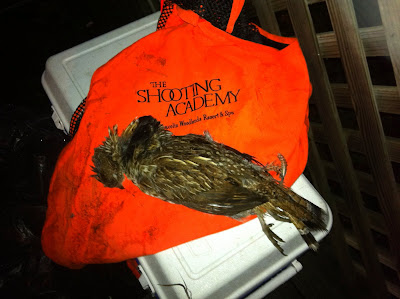 Being Jared is really on a Bird Hunting kick, I figured I would add one of my own. This grouse was killed in the ANF (Allegheny National Forest), with the help of my outstanding guide Garrett Brain and his trusty Gordon Setter (Danner). We had about 30 flushes in 2 1/2 days of hunting, it was a great time and can't wait to do it again!
You have to love the Nemacolin Shooting Academy promotion also...
Posted by stein at 1:10 PM 2 comments: 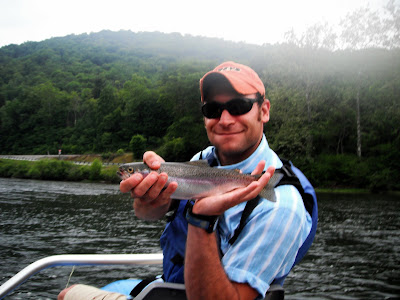 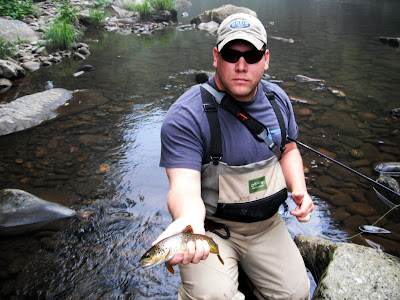 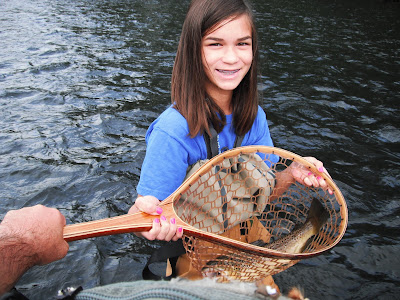 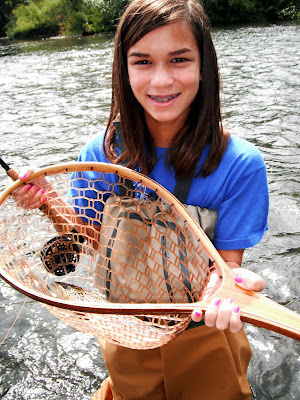 Here are a few pics from last summer. As we approach winter I though it would be nice to look back at a great season. This past season at Nemacolin was awesome, we had a chance to meet and fish with a lot of great people. I already can't wait for spring, and this upcoming season is already shaping up to be great! I also am making a promise to myself to stay on top of the blogging. I really fell off this past season, I left a bunch of great memories undocumented. So my early New Years resolutions is... That's not going to happen this season, so be ready for more pics, videos , and what ever else we can throw at you.
Tight Lines and bring on 2012... The year of the "FISH"
Posted by stein at 12:55 PM 1 comment: 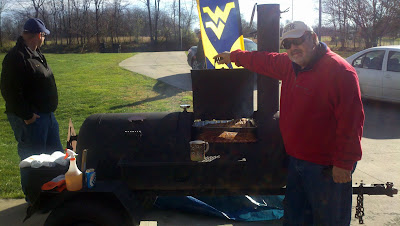 Big Help from Dad and Jimmy with the cook out for the Back Yard Brawl.... 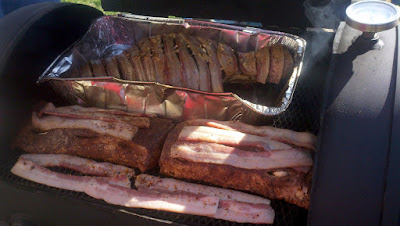 In the foil is a deer hind quarter rubbed in a roasted garlic peppercorn rub. Then we drizzled red wine over it. The two side cars are pork tenderloins that had a spicy coffee rub on it as well. 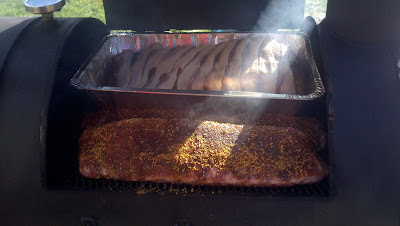 Brisket and two racks of ribs. 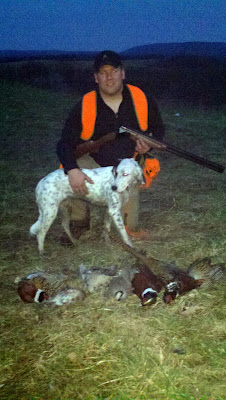 Zoie and I with a solid day with her. 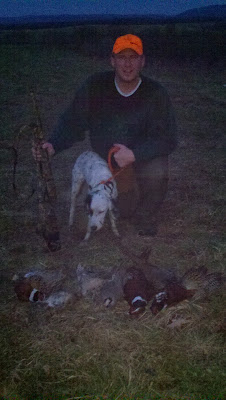 Jimmy and Zoie posing for a photo. 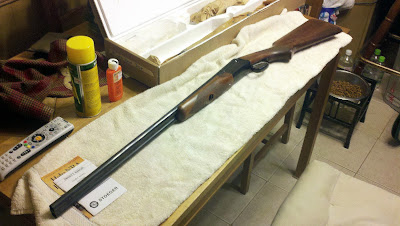 Picked up a new Stoeger Uplander 28 Gauge at Ace's this weekend.

Had a solid Holiday and had a chance to get away to hunt with the dog. On Thanksgiving morning, Jim and I met up for a short hunt in the morning. All we ran into was a flock of turkeys at a local game land. We were still looking for a few stray birds in the fields, but it was rather soggy out and we decided to work up the hill instead. All in all it was a good workout prior to the fest later that day.
On Black Friday, while my wife was out searching out the great deals, Dad, Jimmy and I had taken the grill to a friends house to tailgate for the Backyard Brawl between West Virginia and Pittsburgh. We ended up cooking for close to 50 people and had a great time doing it. I also want to mention that people loved my Smoked Portabellas with blue cheese on them. Always a huge hit.
After waking up with little sleep, Jim was at the house Saturday morning bright and early for some all day bird hunting. We met up with his Uncle Rory and went to a local game land. We saw one bird and it was from a distance. It had crossed the road into a farm land that was posted. Zoie wasn't really birdie that morning due to the lack of scents. We then headed up the mountain to grab a bit to eat at Subway as well as plan our next spot. We hit up another game land in the mountain and was able to flush one Grouse. Jim had the only shot at it, but it was a distance away and moving quickly. We had taken a small break then headed over to the farm to finish up for the day. Zoie at first busted a few birds. But after I reflected on the hunt, I felt that I had her hunt with the wind rather than into it. When we had worked back into the other direction, she started to point really well and held her ground as long as the birds held still. I thought she did rather well and next time I will have my camera. She was very stylish on her points and her tail was straight as can be. She held tight until we flushed the birds. My favorite was when she had point a covey of quail. Between Jim and I, four pheasant, one chukar, and one quail. What a solid weekend for sure.
I have also got on the bench this week. I will post some photos soon on what I have been tying. Enjoy...